WASHINGTON, DC – Today during the 58th Annual Convention of the Equipment Leasing and Finance Association (ELFA), the association announced Martha Ahlers, President of United Leasing & Finance, is the new ELFA Board Chair. She will serve during the next 12 months.

Ahlers has more than two decades of commercial leasing and finance experience. She joined United Leasing & Finance in 1996. In her current role as President, her areas of direct involvement include sales, risk management, marketing, credit, operations and human resources. Prior to her promotion to President, she served as Vice President & Chief Operating Officer.

An active participant in ELFA, Ahlers has served on the ELFA Board of Directors since 2014. In addition to her current position on the ELFA Board, Ahlers is a member of ELFA’s Executive, Nominating and Personnel Committees. She previously served on the Fair Business Practices Committee. From 2015 to 2016, Ahlers was Chair of LeasePAC, ELFA’s nonpartisan federal political action committee.

Ahlers has been involved in numerous civic and community organizations.

“We are extremely fortunate to have Martha Ahlers as Chair of the Board of Directors for 2020,” said ELFA President and CEO Ralph Petta. “Martha’s proven leadership skills, industry knowledge and dedication to our association will have a positive impact on both the ELFA membership and the equipment finance industry at large in the coming year.”

“I am honored to take on the role of ELFA Board Chair,” said Ahlers. “The $1 trillion equipment finance industry plays a critical role in the U.S. economy. I look forward to working with the Board of Directors, the staff and all the members to advance our association’s important work in support of our great industry and the people who drive it.”

The Equipment Leasing and Finance Association (ELFA) is the trade association that represents companies in the $1 trillion equipment finance sector, which includes financial services companies and manufacturers engaged in financing capital goods. ELFA members are the driving force behind the growth in the commercial equipment finance market and contribute to capital formation in the U.S. and abroad. Its 575 members include independent and captive leasing and finance companies, banks, financial services corporations, broker/packagers and investment banks, as well as manufacturers and service providers. For more information, please visit www.elfaonline.org.

Founded in 1964 United Leasing & Finance (ULI) has assisted in the growth of thousands of organizations located in all 50 States and Canada by providing tailored financial solutions through leasing and commercial lending. For over half a century, ULI has partnered with clients to achieve mutual success. Clients who partner with ULI vary from small businesses to Fortune 100 companies. 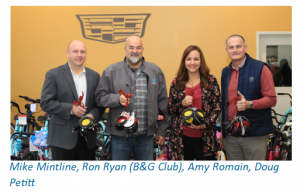